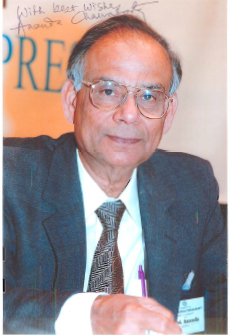 Ananda M. Chakrabarty -Ph.D. is a Bengali American microbiologist, scientist, and researcher, most notable for his work in directed evolution and his role in developing a genetically engineered organism using plasmid transfer while working at GE. Prof. Chakrabarty genetically engineered a new species of Pseudomonas bacteria (”the oil-eating bacteria”) in 1971 while working for the Research & Development Centre at General Electric Company in Schenectady, New York. At the time, four known species of oil-metabolizing bacteria were known to exist, Prof. Chakrabarty discovered a method for genetic cross-linking that fixed all four plasmid genes in place and produced a new, stable, bacteria species (now called pseudomonas putida) capable of consuming oil one or two orders of magnitude faster than the previous four strains of oil-eating microbes. The new microbe, which Chakrabarty called “multi-plasmid hydrocarbon-degrading Pseudomonas,” could digest about two-thirds of the hydrocarbons that would be found in a typical oil spill. The bacteria drew international attention when he applied for a patent—the first-ever patent for living organism. He was initially denied the patent by the Patent Office because it was thought that the patent code precluded patents on living organisms. Prof. Chakrabarty’s landmark research has since paved the way for many patents on genetically modified micro-organisms and other life forms and catapulted him into the international spotlight. Currently, his lab is working on elucidating the role of bacterial cupredoxins and cytochromes in cancer regression and arresting cell cycle progression. He has isolated a bacterial protein, azurin, with potential antineoplastic properties. He has expanded his lab’s work to include multiple microbiological species, including Neisseria, Plasmodia, and Acidithiobacillus ferrooxidans. In 2001, Prof. Chakrabarty founded a company, CDG Therapeutics, (incorporated in Delaware) which holds proprietary information related to five patents generated by his work at the University of Illinois at Chicago. Chakrabarty is currently a Distinguished University Professor in the Department of Microbiology and Immunology in the University of Illinois at Chicago College of Medicine. Apart from being an eminent scientist, Ananda Chakrabarty has been an advisor to judges, governments, and the UN. As one of the founding members of a UNIDO Committee that proposed the establishment of the International Centre for Genetic Engineering & Biotechnology (ICGEB), he has been a member of its Council of Scientific Advisors ever since. He has also served the Stockholm Environment Institute of Sweden. He has been on the Scientific Advisory Board of many academic institutions such as the Michigan Biotechnology Institute, the Montana State University Centre for Biofilm Engineering, the Centre for Microbial Ecology at the Michigan State University, and the Canadian Bacterial Diseases Network based in Calgary, Canada. Dr. Chakrabarty has also served as a member of NIAG, the NATO Industrial Advisory Group based in Brussels, Belgium. He is a member of the Board of Directors of Einstein Institute for Science, Health and the Courts, where he participates in judicial education. More recently, he has been involved in international judicial work, serving as a Scientific Advisor for meetings in Hawaii and Ottawa, Canada, organized by the Supreme Court of Canada. For his work in genetic engineering technology, he was awarded the civilian Padma Shri by the Government of India in 2007.

Jingrang Lu is a biologist with the U.S. Environmental Protection Agency in Cincinnati, Ohio. His research work focuses on the molecular method development, detection and microbial exposure assessment of waterborne pathogens in source, drinking and recreational water using qPCR, transcriptomic, metagenomic and genomic analysis and host animal model. The developed molecular methods are applied to track bacterial pathogen contaminants, and to assess water quality and pathogenic risks of public health. Currently, he and his research team are working in the following areas: 1) the approaches for early warning of cyanobacterial harmful algal bloom and cyanotoxin assessment of public health; 2) Infectious risk assessment of Campylobacter jejuni isolated from source and recreational water using chick model; 3) Infectious risk assessment of Legionella pneumophila in drinking water using a model shower aerosol chamber. He holds a PhD in microbial ecology and a MS in zoology. He has over 60 authored and co-authored peer reviewed publications. His main interests are to apply molecular approaches to applied environmental microbiology and public health researches. He is a member of American Society for Microbiology.

Huang Wei Ling, born in Taiwan, raised in Brazil since the age of one, graduated in medicine in Brazil, specialist in infectious and parasitic diseases, a General Practitioner and Parenteral and Enteral Medical Nutrition Therapist. Once in charge of the Hospital Infection Control Service of the City of Franca’s General Hospital, she was responsible for the control of all prescribed antimicrobial medication, and received and award for the best paper presented at the Brazilian Hospital Infection Control Congress in 1998. Since 1997, she has been presenting her work worldwide, concerning the treatment of various diseases, using techniques based on several medical traditions around the world. 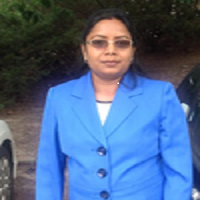 Durgesh Sinha, female, did Ph. D (Applied Mathematics), M. Sc. (Mathematics), B. Sc. (Mathematics honors) in 2000, 1996, and 1994 respectively from Vinoba Bhave University, Jharkhand, India. Apart from this she did M. Sc. from Civil and Environmental Engineering department, Temple University, Philadelphia, USA in 2008 to enhance skill on Applied sciences. Since 2008, she started teaching at Temple University (2008), Rowan College at Burlington County (2009), Strayer University (2010), Community College of Philadelphia (2014), and Mercer County Community College (2014) till current as an Adjunct Assistant professor. Meanwhile I involved in research of Computer virus and infectious diseases modeling, and I published three papers in reputed Journal Scientific Reports (Nature), and J Immunol. Tech. Infect. Disease in 2016, and 2018. My current research goal is of Epidemics and cyber-crime.

Professor.Dr.Ahmed G.Hegazi currently working as a professor of Microbiology and Immunology in National Research Center, Dokki, Giza, Egypt with a work experience of more than forty years. He bagged many awards and the recent one was “Merit Aware of Medical Sciences, 2016” and he has four patents, 224 Articles. He was Secretary General at African Federation of Apiculture Associations (AFAA) and member of many scientific boards and Editorial Board of many journals. His contributions to the field of Microbiology and Immunology was incredible and we are privileged to have him as Organizing member.

Dr. Subodh Kumar Saha, B.V. Sc & A.H., M.Sc. (D), PhD, FNAVS, principal Scientists born on 1st November, 1967 in the district of Burdwan, West Bengal and started his career as scientist in the month of August 1995 at Animal Science division, Central agricultural research institute, Port Blair, A & N islands after completion of his management training at National Academy of Agricultural Research Management, Hyderabad. He served as scientist for seven and half years in the Central Agricultural Research Institute at Port Blair, A & N Islands, where he worked on use of alternate feeds in islands for livestock production, use of probiotics for livestock and poultry production, developed different feeding schedule for livestock and poultry, use of tree leaves for goat production. Presently, he is fully engaged in teaching, research and extension activities in Centre of advanced faculty Training in Animal Nutrition at Indian Veterinary Research Institute. He is working in the area of unconventional feeds, its detoxification and nutrients utilization for last eight years. Recently, he is working on clinical nutrition to develop a feed based control measure for gastro- intestinal nematodes. He published more than eighty research papers in national and international repute journal. He presented more than 100 conference papers, published many books in animal nutrition, folders, bulletin and monograms. He bagged many awards and recognition in his career like best paper awards from Indian Dairy association, recognition award due to best poster in IVLP work and received fellow from National Academy of veterinary Sciences due to significant contribution for advancement of veterinary sciences. He has also visited USA and undergone training on mitigation strategies of methane production in ruminant livestock at Iowa State university, Ames, Iowa, USA. He also awarded prestigious Endeavour fellowship for post doctorate research in 2015-16 at CSIRO, Brisbane, Australia. He successfully guided more than 20 post graduate students as an advisor so far. Recently, he visited Berlin, Germany where he presented an invited lecture on scope of unconventional feeds for livestock production in India.

Be a member and support us

Cancellation, Postponement and Transfer of Registration

If Allied Academies postpones an event for any reason and you are unable or unwilling to attend on one of the rescheduled dates, you will receive a credit for 100% of the registration fee paid. You may use this credit for another Allied Academies event which must occur within one year from the date of postponement.

Allied Academies is not responsible for any loss or damage as a result of substitution, alteration or cancellation/postponement of an event. In the unlikely event of cancellation or postponement of the conference due to circumstances beyond Allied Academies reasonable control including but not limited to, acts of terrorism, war, and natural disaster, Allied Academies cannot be held responsible for any cost, damage or expense which may be incurred by registrants as a consequence of the event being postponed or cancelled. Due to any unavoidable circumstances, if there is a change in venue of the conference, all the registered participants will be intimated immediately regarding the change.

All fully paid registrations are transferable to other persons from the same organization, if registered person is unable to attend the event. Transfers must be made by the registered person in writing to is infectiousdiseasescongress.alliedacademies.com Details must include the full name of replacement person, their title, contact phone number and email address. All other registration details will be assigned to the new person unless otherwise specified.

Keeping in view of advance payments towards Venue, Printing, Shipping, Hotels and other overheads, we had to keep Refund Policy is as following slabs-